Nobody likes to read about failing (or maybe they do since it’s a great opportunity to learn from others’ mistakes), but it’s a harsh reality in this line of work. The most important thing is to learn something new, and that can be only managed through trying. And when you try, you’ll fail. A lot.

A month ago i finally pushed the big, red START CAMPAIGN button on IndieGoGo and hoped for the best. After all, months of preparation were a guarantee that i will succeed, no matter what. I explored many successful crowdfunding campaigns, the pitch was good, teaser was cool, campaign was well designed with all the feature listed, expenditures broken down. I was completely transparent with what the funds will be used on and i hoped the material i provided (along with the demo available) will be enough for a few hundred people to pitch in a few bucks. With all those games gathering tens of thousand of dollars, why wouldn’t i have a crack at gathering only $3000?

I must admit that the only thing i was worried about was extremely small number of people that suscribed to the campaign (40+). Though IndieGoGo clearly states that it’s really important to make a huge mailing list so everyone can be notified of the campaign start (and it does show number of interestees in your product), i was sure that my twitter follower list (1000+) and profiles on various shmup and game development would do the trick.

First few days were great, i managed to get $500 (20%) dollars quite quick and i could already see myself gathering enough funds to make the game a shiny pixel art gem i always wanted to make. Alas, upon further inspection, i realised that most of the backers were either my friends and few twitter followers. Only 23% of funding came from direct IndieGoGo traffic. Regardless of that, i was under (false) impression that the funds will keep on coming. 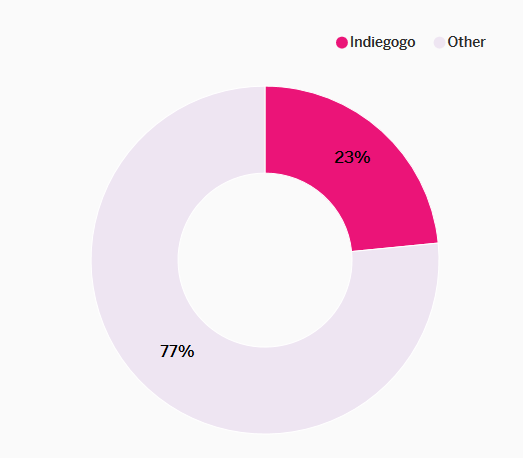 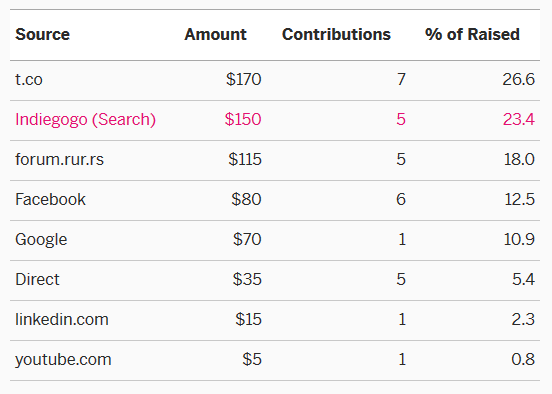 Then donations began to plummet, and 10 days into the campaign i started receiving $0 per day. It was too late to start contacting streamers (woovit page with hundreds of them is still open in my browser) since most of them have really busy schedules and i don’t think they’d find the time to include my game until the campaign ends. I could extend the campaign duration to 60 days, but it would be unfair to all the backers to withold their money for another month when i’m certain i wouldn’t manage to collect another 80% of the funds projected to finish the game. Flexible funding was not an option since i would tie a noose around my neck to follow strict deadlines i imposed and some stuff that really takes time (like Galaxy Database) and not gather enough funds to keep those promises.

Some further analysis showed that i had 238 visits from USA/UK/Germany combined and only $25 pledges combined from those countries, which probably means they had the interest in seeing what’s it all about, but they were either not attracted enough or they though that the game’s never going to reach $3000 so they never pledged. It’s easy to theoreticize now, but if the goal was $1000 and each of those visitors gave $5, the campaign would have been a success.

My biggest mistake was setting the bar too high. As you know, backers are turned off when they see the goal is too high to reach. I should have opted for something like $1000 which was attainable and then keep gathering funds via InDemand program.

Not making a good enough teaser (it is ok, but it can be a lot better).

Not contacting streamers before the campaign start.

Starting campaign too early, the demo i released obviously had too many bugs and i don’t have a big enough community.

Overestimating social media. Twitter likes don’t translate to pledges (and won’t translate to sales too i reckon). After all, most of the followers i have over there are gamedevs themselves and need money for development too.

Not including Facebook into the campaign (personal bias, shouldn’t let that affect business).

I didn’t make proper and regular updates to the campaign and i haven’t made a roadmap of campaign updates.

I didn’t make a break before finishing the campaign and pushing the start campaign button, i was EXHAUSTED and i didn’t have the strength to keep pushing through a month of active work on campaign to get more backers.

Making mistakes is good, and even an unsuccessful campaign is a good marketing,  i received quite a few publishing offers based on exposure campaign has made.

You can’t rush things. Game entered fourth year of development and i was getting impatient. Big mistake, the game is ready when it’s ready, not after being too long in development.

Managing my expectations. It’s quite easy to give yourself a false impression of things biased by what you think that will and should be.

Of course, the game will keep on developing, but i will have to find another source of funding, probably via publisher. Also, i would like to use this opportunity to send a big THANK YOU to everyone supporting me, see you in Early Access!